FAT32 vs NTFS vs exFAT: Choose Your Device File System 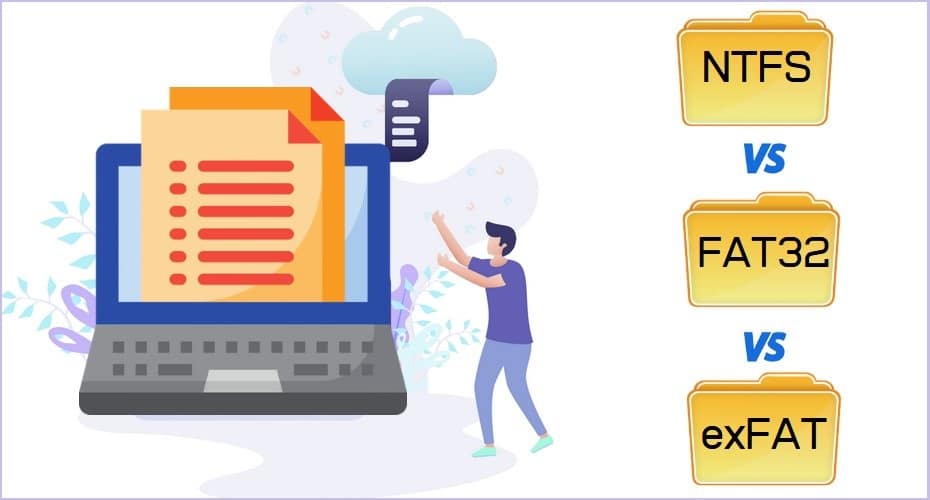 Do you know the difference between the NTFS, FAT32, and exFAT formats? These are file system formats that are used for storage. In this article, we will cover the major differences.

Have you ever wondered what feature is used in a computer to store, and organize your data in your hard drive? Well, the file system is responsible for that role. A file system controls how data is stored and received. Hence, without a file system, data placed in a storage medium would be one large body of data with no distinction. Therefore, you wouldn't know where certain data ends and where another type of data begins. In other words, a file system is a method and data structures that an operating system uses to keep track of files on a disk and organizes data. There are various file systems established by different organizations to perform these functions. Some of these file systems are NTFS, FAT32, and exFAT. NTFS stands for New Technology File System.  It is used by Windows NT for storing, organizing, and finding files on a hard drive. It is a proprietary journaling file system developed by Microsoft. This is the default file system of Windows NT. NTFS was established in the year 1993 with Windows NT 3.1.

This file system has the “self-healing” feature that detects the errors and flaws in the hard disk and repairs the disk automatically. NTFS allows user control access that enables the administrator to set permissions or passwords on specific files or folders. You will also be able to compress files while using this file system which aids in saving disk space. The B-Tree directory scheme is applied in NTFS that keeps track of all file clusters thus improving the performance. FAT stands for File Allocation Table which is a file system developed for PCs. It was originally developed in 1977 to be used on floppy disks and later adapted for use on hard disks and other storage devices. Fat32 is used by operating systems to manage files on storage devices.

It supports drives with over 2GB of storage since it contains more than 65,526 clusters. It includes 4 bytes per cluster within the file allocation table. This is the extended file allocation table that was introduced in 2006. It was designed to be a lightweight file system with extra features without the limitations of FAT32.

It can support all versions of Windows and modern versions of Mac OS X but when it comes to Linux, it requires additional software to make it work. For a full backup, exfat is the best alternative. The timestamp comes with a time zone marker in offset relative to UTC. It has a free space bitmap feature that frees space allocation and deletes. Exfat is not limited to the short 8.3 filenames. Has a cluster size of up to 32 MB. There is a provision of OEM-definable parameters to customize the file system for specific device characteristics.

Which file system format should I use? The internal hard drive helps to store your computer's data safely on the computer. On the otherside, an external hard drive helps to store data from the main device. This is mainly reliable when you want to have a backup for your files away from the main computer. A USB flash drive is important when you want to transfer certain data from one device to another.

Since Linux does not support the NTFS file system nor fat32, the best choice would be exFAT. This is because exFAT only requires the specific extra software that would make it possible for Linux to support the exFAT file system.

It is safer to back up your files before converting just in case something goes wrong. To ensure a safe conversion of exFAT to NTFS, you have to turn to a different syntax format.

From the above-discussed file systems, it is true to say they all have their advantages and flaws. When you want to choose a file system among NTFS, FAT32, and exFAT, you have to analyze and weigh their properties to get a good choice. A good file system results in organized files and data.