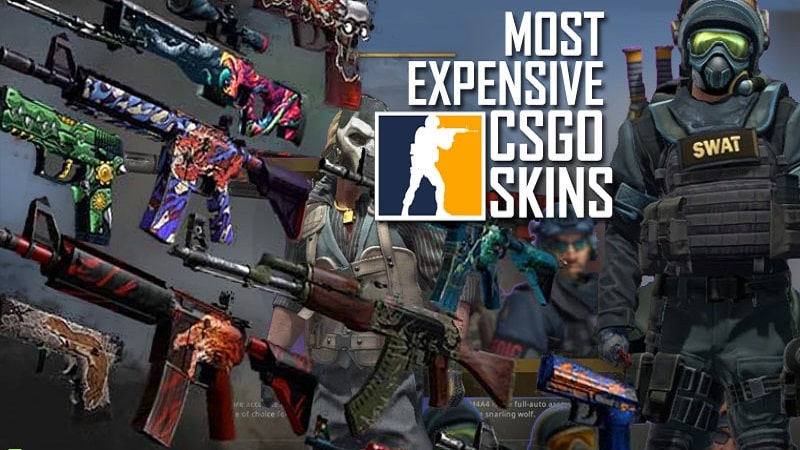 CS:GO fans purchase new skins for many reasons. The original design of a rifle or knife may give some players confidence during the game.

Others are just collecting expensive digital equipment with an original look. Some gamers buy costly CS:GO skins to sell them later for a higher price over time. Eventually, some items become more expensive. Experts advise buying pricey weapons only on trusted sites.

Most Expensive Sniper and Assault Rifles in CS:GO

AWP | Gungnir was released within the North collection. This weapon was added to the game in 2019.

Each version of this rifle is dedicated to a specific e-sports match. The stickers show the emblems of particular events or certain teams.

The Factory New Souvenir AWP | Dragon Lore commonly costs as much as $20,000 and even more. Battle-Scarrred exteriors can be bought for $10,000+.

This assault rifle's variation has a beautiful pattern on its upper side. The decorative finish of this CS:GO skin has the structure of a blue gem. Players may purchase the Factory New weapon for $30,000.

This assault rifle is an extremely rare weapon due to its ownership disputes. Well-Worn M4A4 | Howl rifles without proper stickers can be found for more than $2,000. A Factory New weapon costs about $100,000+.

Most Expensive CS:GO Knives and Items

The list should surely start with Sapphire Karambit or Butterfly Knives. Such skins will be an excellent addition to the militant image for connoisseurs of truly original equipment. The average price of such a knife is $8,000. But some skins cost more than $10,000. The other costly CS:GO skins are:

And, of course, it's essential to include the priciest CS:GO skin: the Karambit | Case Hardened (387) with a decorative blue gem finish. A CS:GO player purchased the knife for $100,000 in 2016. Sometime later, this gamer was offered $1.2 million for the knife. But he didn't sell the knife. Instead, he requested $1.5 million for the weapon.

Main Features of Choosing a Marketplace to Buy a Pricey CS:GO Skin

To understand what an authoritative site with original weapons looks like, players should visit a site such as dmarket.com. The website's key features include: