How to Install Fans in PC & Airflow Design Guide 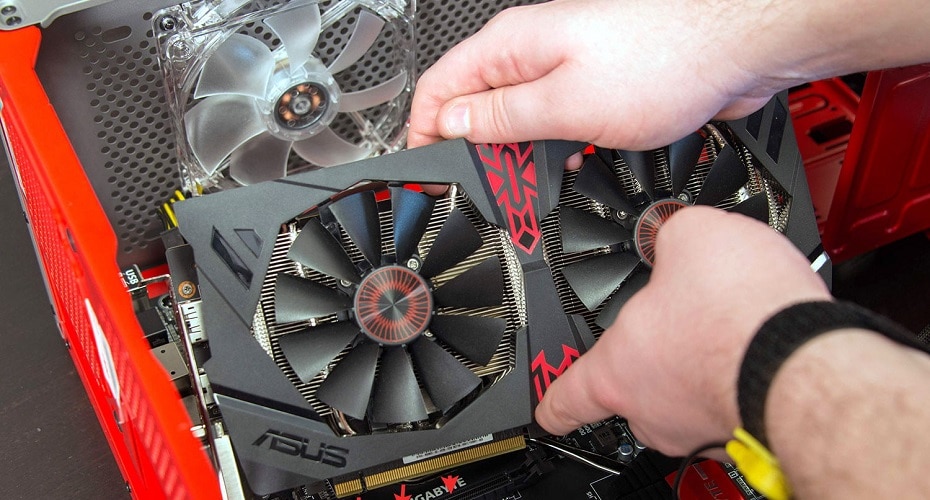 The fan must be matched and installed correctly to maximize its cooling effect on computer components. Here, you’ll learn how to install fans on PC so as to maximize heat dissipation effect of the chassis. Read on for the details….

To keep your PC working at its optimum, proper cooling is key. The fan is responsible for facilitating heat loss from within the computer's chassis. Proper assembly of the PC fan is critical. This cannot be stressed enough. Before the installation, though, you need to know what type and model of the fan match the PC in question.

That’s to say; fans are not designed the same. No one size or model of fans fits all computers. Instead, each PC brand and model has a unique fan associated. With that being said, here are the things to consider before buying a fan and installing your computer.

Determine the Number of Fans in Case 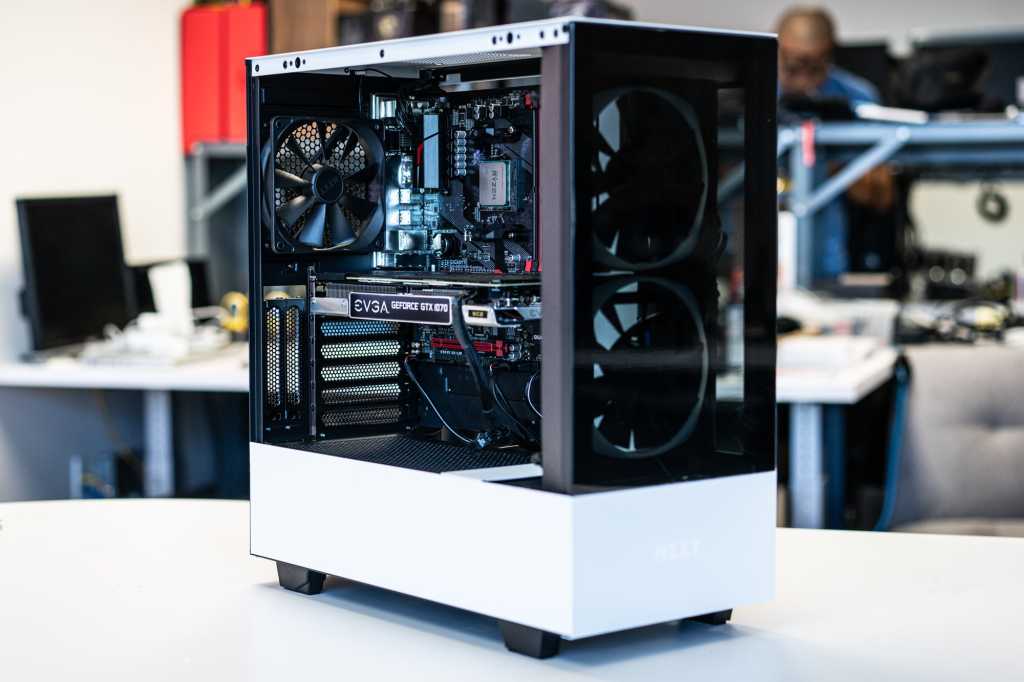 Trying to figure out how many fans are inside your case. Many cases have more than one fan installed, but there may be room for more. If you want to add additional fans, you need to know how many are already in the case before starting.

There are different computer cases, each with a specific internal layout. The type of case determines the location and orientation of the fan. These two aspects, location, and orientation affect the heat dissipation efficiency of the fan.

There are two major types of computer cases used today. They include ATX and micro-ATX (M-ATX). There are major differences between the two types regarding the number, installation, and orientation of fans.

If you have an ATX case, be sure to check and establish the number of pre-installed fans. You can do this by physically checking and counting the number of fans. Alternatively, you can check the user manual for details on the number of fans already installed. With that information, you can then buy a fan that matches your case.

If you have an M-ATX case, there are probably 2 standard fans already installed; one at the back and another at the front section. This particular case comes with an additional 80mm slot for another fan.

We recommend replacing that with a 90-120mm fan. To improve, especially if you need more airflow over the components of your gaming PC.

Another important aspect to consider when choosing your PC fan is the size and speed. There are generally two major fan sizes; 80mm and 120mm. Besides these two, there are also some rare sizes of fans; 60mm and 140mm. The larger fans on your PC chassis have the advantage of improved airflow hence better cooling efficiency.

That comes in handy for gaming computers and other PCs that generate significantly high amounts of heat. Smaller-sized fans are best for home and office computers with low heat emission rates. The need for portability in some PCs may also influence preference for smaller over bigger fans.

The speed of the fan affects its air circulation efficiency. Fans with Pulse Width Modulation (PWM) feature allow easy speed regulation. Meaning, you can decide how fast or slow you want the fan to operate, depending on the nature of the task being processed by the PC.

Confirm the fan's speed on the user manual or ask the merchant for clarification.

Reasonable Design of the Fan

The design of the PC’s air ducts should be informed by the principle of cold air at the bottom and hot air at the top. Based on this simple but crucial concept, the air inlet for your PC should be located at the bottom of the front section of the chassis.

On the other hand, the outlet should be located at the top section of the back PC case. Adjustments should be in line with the number of fans installed on the case. For instance:

i. One Fan: If your chassis supports only one fan, it has to be located on the rare section next to the I/O baffle. That location ensures more efficient and proper circulation of air and heat dissipation from the chassis. 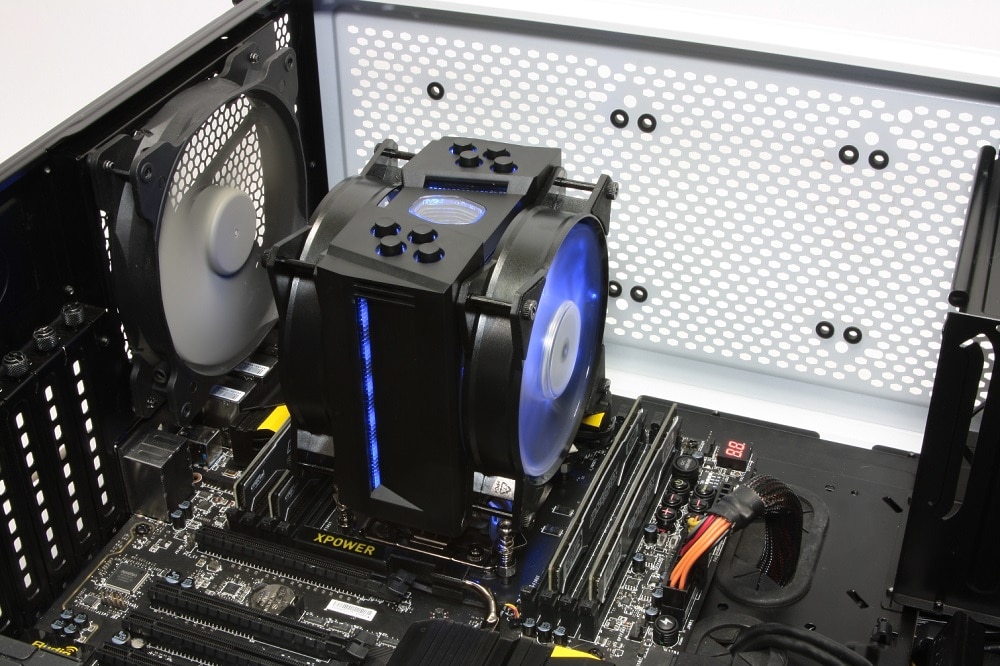 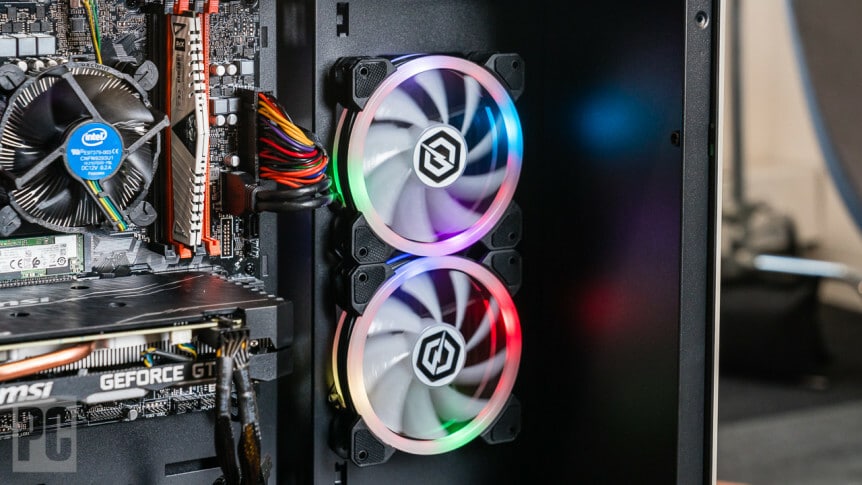 In either positions, the inlet serves to suck cold air into the chassis. However, for the best air circulation and heat loss via convention, we recommend situating the inlet fan at the bottom part of the front section.

iii. Three Fans: If your chassis supports up to 3 fans, you should install one inlet fan at the bottom part of the front and back sections. Of course, the third fan is the outlet located at the top part of the back section. The idea is to maximize air flow for enhanced cooling of the PC components. 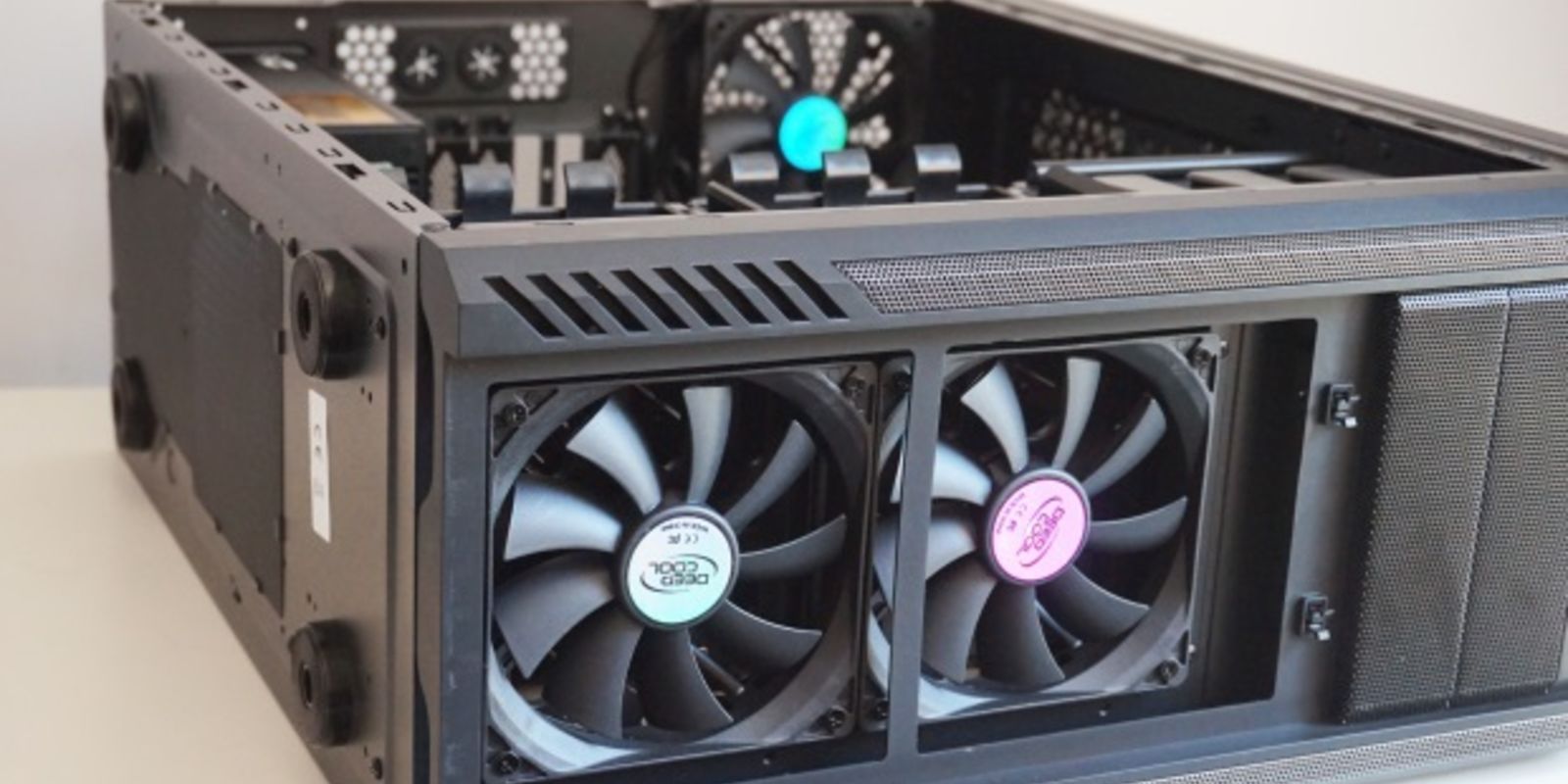 iv. Four Fans: For a PC case that has up to 4 fan slots, the distribution should be such that you have two inlet fans – both at the bottom parts of the front and back sections- and two outlet fans- both located at the top part of the back section. 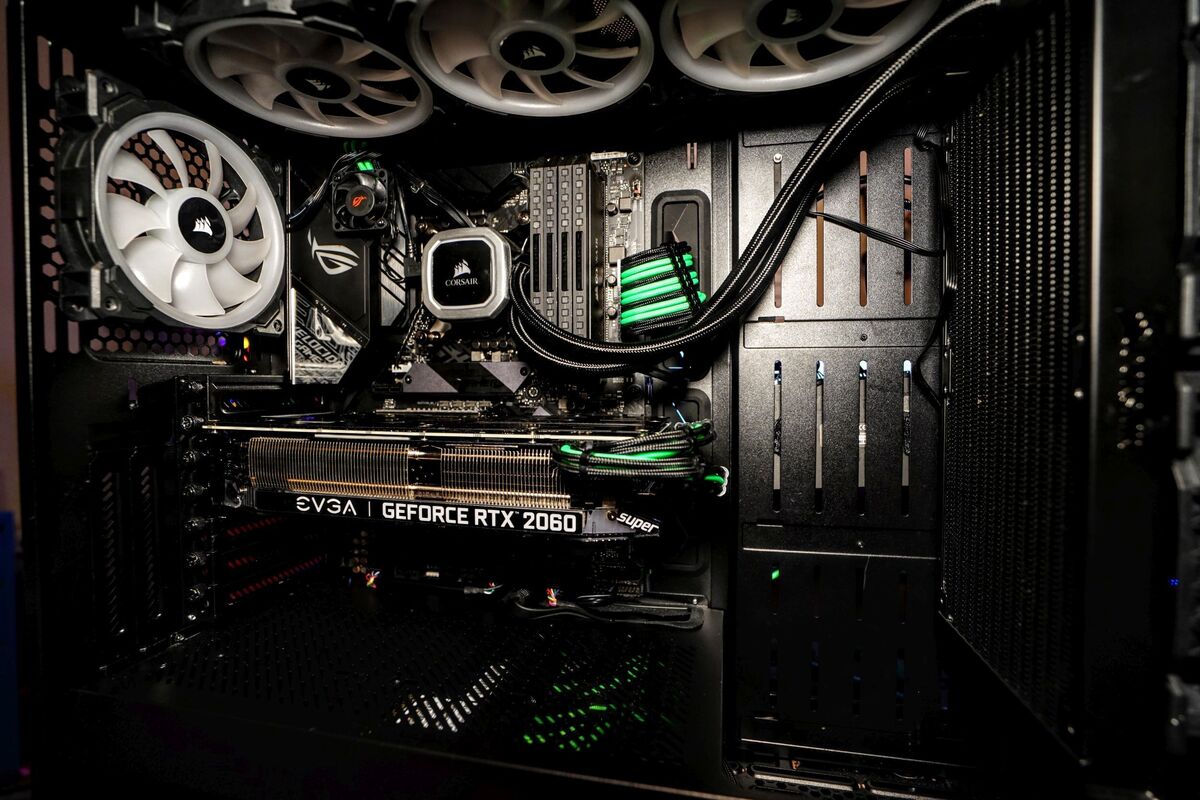 That way, you’ll maximize the cooling effect of all four fans. Remember, the top section of most PC cases has cooling vents to further enhance convectional heat loss from the chassis.

v. More than four fans: If you wish to install more than 4 fans on your PC’s case, 2 should constitute the inlets located at the top part of the back panel. You can have two inlet fans at the bottom parts of the front and back sections. If you still have more, you may consider having one or two more outlets at the front section. 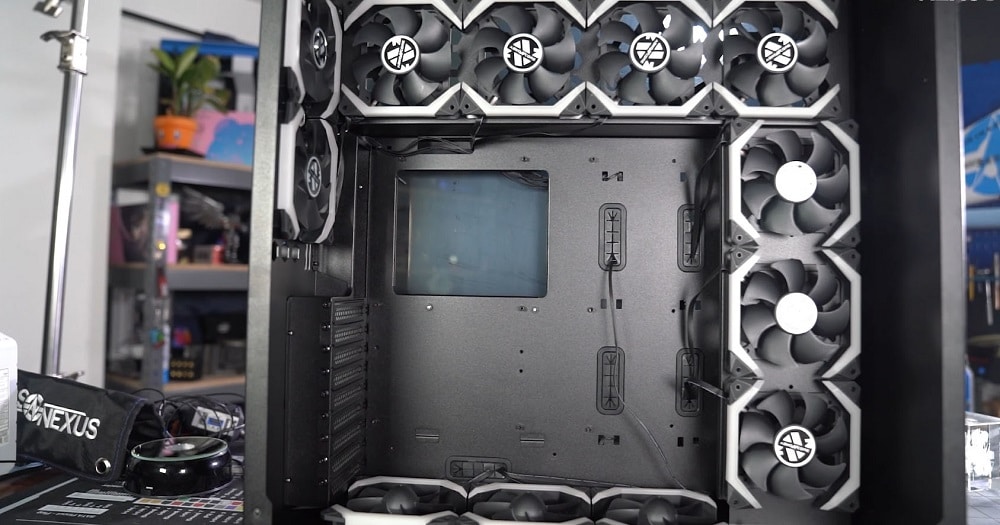 Identify the Wind Direction of the Fan

Something else to consider regarding how to install fans on PC is the wind directions of the fans. To mean the inlet and outlet fans have their blades specially designed and configured to suit their function. Air inlet fans usually have their blades aligned in an inward configuration.

On the other hand, outlet fans have their blades aligned outwards. All PC fans have the same direction of rotation. What distinguishes inlet from outlet fans is the alignment of the blades.

Check the alignment of the blades by physically examining them. Do this before installation so that you don’t end up with the inlets fans at the place of outlet fans and vice versa. 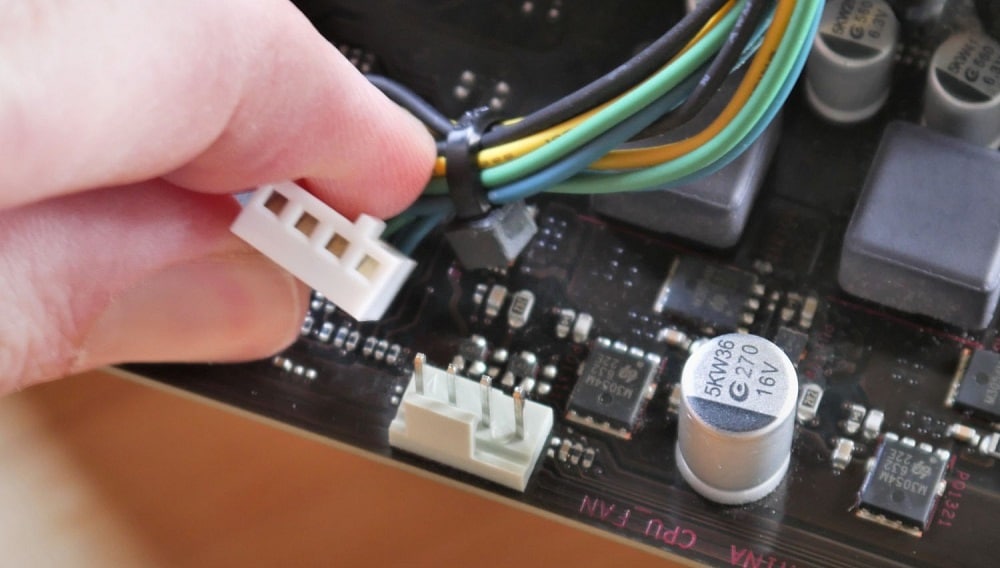 The next step in the installation of fan on PC is the connection of the Power Supply Line (PSL). The power supply line of the cooling fan is usually 4-pin in series. While it’s possible to connect the fans directly to the motherboard, this practice isn’t recommended because it interferes with the voltage output of the motherboard.

High motherboard voltage can easily damage your electronic components attached to the motherboard. Apart from the CPU fan, which draws its power via the SYS-FAN, all the other PC fans are connected via the PWR-FAN interface.

Install the fan using a Screwdriver 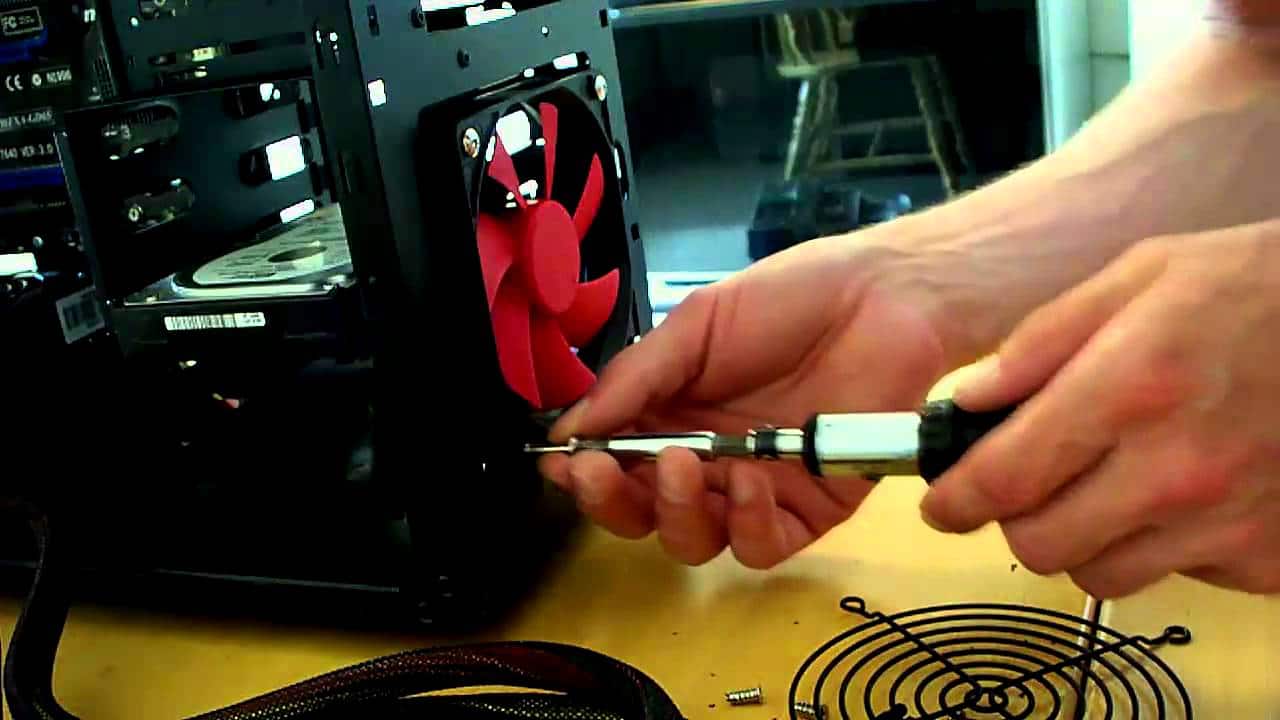 Use a Dust Filter 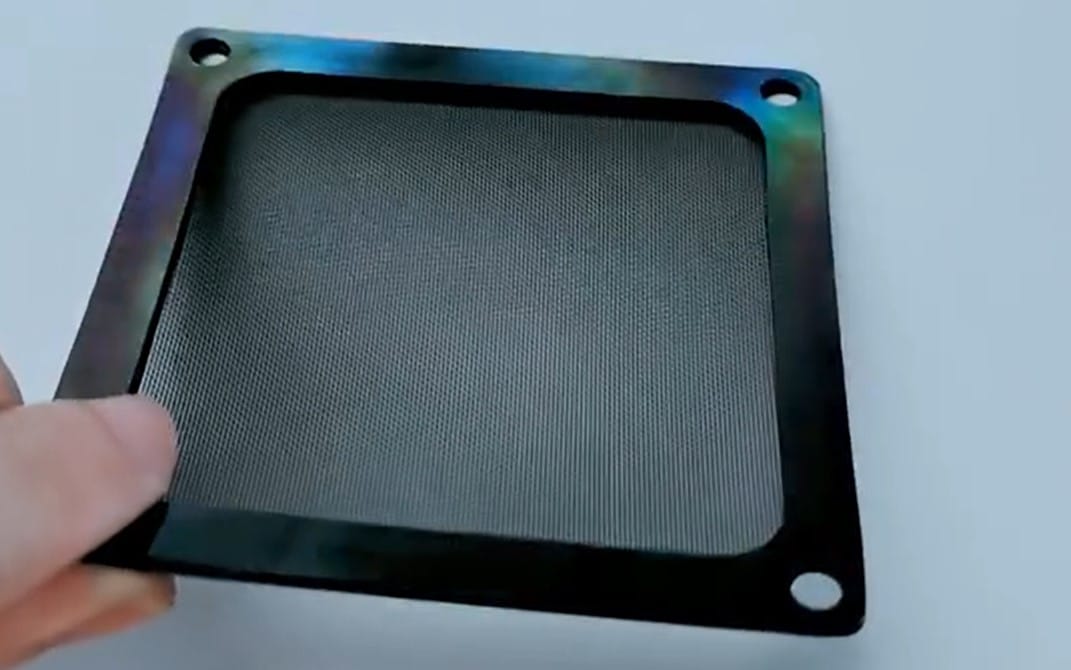 With the fan firmly in place, you are almost done. What’s left is fitting in the dust filter. Usually, the air inlet fan has dust-proof net situated in front of the fan—the net acts as the air filter that protects dust-sensitive PC components located inside the chassis. 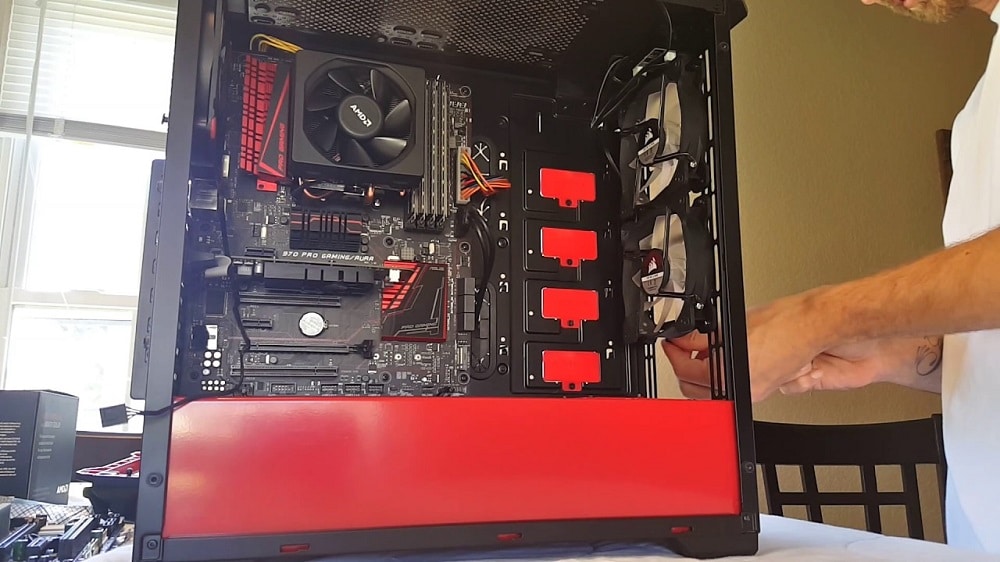 After installing the fan and adding the dust filter to the inlet section, it’s time to put the chassis again. Reattach sections and side panels with screws and holding mechanisms to get ready to put the fan to test.

1. What to do if the fan interface of the motherboard or power supply is not enough

You can use a fan extender to attach an extra fan. And it is very easy to use. Just plug it in and the fans should be able to operate.

Yes, you can buy fans for your Pc depending on its use. For office or home PC with limited applications running, you don’t need any additional fans. However, for PCs used for gaming and other intensive operations, you may want to buy additional fans to improve the cooling efficiency.

That’s it. We’ve come to the end of this guide. You should now be able to choose the right fan for your PC ad to install it appropriately. To keeps the wires safe and secured in position, we recommend using cable ties to bind them together. That way, they won’t entangle the fan during operations.