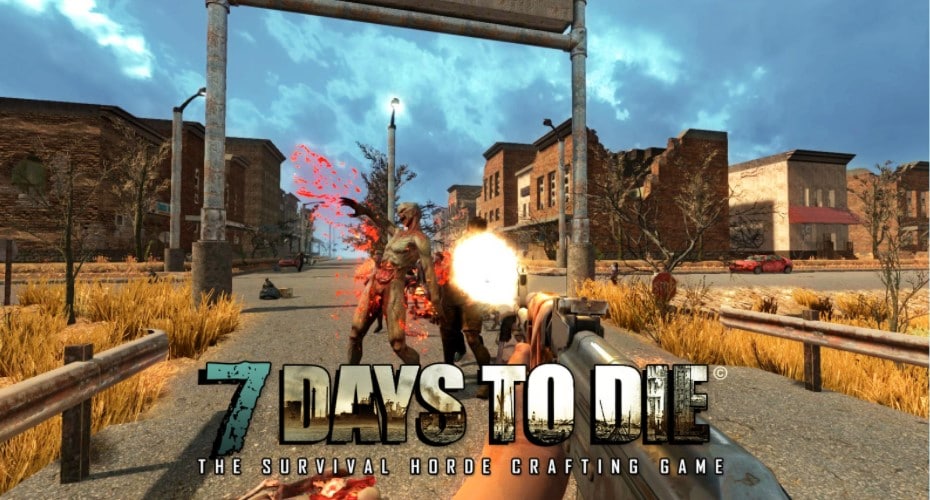 Zombie games are timeless, they have a loyal following, and if you like the violence aesthetic, then games like 7 Days to Die are next.

The idea of World War had always been terrifying, but a Nuclear World War? That’s something even more lethal. The event that occurred had caused the majority of the world to be destroyed. Only a few countries avoided the aftermath of the Nuclear War.

You play as a survivor in one of those lands, seeking to build shelter, find food and water while protecting yourself from the Zombies that seemingly due to the chemicals the Nuclear had spread.

So go quickly and find weapons to kill those zombies with, whether it’s some rocks, axes, or machine guns!

The world had suddenly been hit with an unknown virus; those infected by it receive a quick death before they turn into walkers. Following the comics of the walking dead, The Escapists is a well-crafted 8-bit game where you will have to take care of your group and protect them from zombies, trying to keep as many alive and move to another settlement.

Engage in many challenging tasks and daily missions to proceed with the story. Collect items, feed yourself, and shoot zombies!

2. Night of the Dead

A girl named Lucy finds herself trapped in a city full of zombies on an island. Waking up from a human experiment, she struggles to find a way to defend herself from those threatening walkers until she can communicate with other survivors on the island. Just like 7 Days to Die,  This game is a great alternative.

You will have to deal with sets of zombies coming in waves to build bases to protect yourself from the hordes. Place traps and explore the world, interact with animals and even play with your friends.

After a breakout of a virus that caused zombies to spread in one of the cities in Iran, a group is tasked to contain the outbreak in this quarantined city to try and stop the ministry of defense from bombing it to eliminate the virus.

As one of the survivors tasked to contain the outbreak, you play in a first-person shooter survival thrilling game with amazing graphics and story-driven gameplay; Dying Light has exceeded expectations and become an award-winning game known for its very amusing parkour, combat, challenging AI, and a fantastic Day & Night cycle.

The behavior of zombies during the night gives the game an agitated and terrifying atmosphere for the player to experience.

In a survival fast-paced battle royal, over one hundred competitors fight to be the last one standing. Held inside a wide area filled with loot, weapons, vehicles, and other items, each player will have to use anything they can find to help them survive as long as possible before the deadly circle starts moving closer to the center of the map.

You can play this battle royal in teams of two, four, or Solo if you feel like being a lone wolf. Prepare yourself to fight against other players with the same survival instinct and find your path to reach spot number one.

In a post-apocalypse world where zombies destroy human civilization, many of the remaining survivors try their best to stay alive in this decaying world. You play in an open survival world fighting hordes of zombies that are a force to be reckoned with.

The game is filled with many parts and loots to scavenge that you can use to craft and upgrade many of your items.  State of Decay also has important decisions because survivors can permanently die, making your choices vital to the game.

After a virus outbreak that put humanity under the threat of extinction, the surviving humans must now find a way to keep themselves safe. You will play as a survivor who was immune to the spreading virus; you will be looting, gathering food, building the base, and helping other survivors on the way.

The sound design in this game is amazing and matches the creepy atmosphere that comes along with the vast mist.

After a hotel party, the main protagonist finds himself alone and abandoned; after further investigation, he discovers that many people have been infected and have turned into zombies. Trying to escape from the hotel, he encounters other survivors.

You play in a beautifully open environment in a first-person perspective where you can gather different weapons and upgrade items as you become a zombie killing machine.

Dead Matter takes place in a realistic interpretation of Alberta, Canada, in a post-apocalypse world. After a virus has caused infections, dangerous zombies start to arise.

In a high-quality first-person perspective with a wonderfully designed world, you will attempt to survive from the infected while mastering activities like camping, farming, and hunting. Dead Matter emphasizes realism making it more difficult than average survival games.

Companies have taken control of overcrowded prisons. They have put prisoners together on random islands and started a television series. Unlike other survival games, SCUM gives you a full character creation with amazing details and insanely complex mechanics.

There are many pros and cons for the choices and selections you make, making this game much more hardcore than other survival ones. You will have to defend yourself in these threatening environments, whether from animals, other prisoners, or keeping yourself from starving. Fantastic graphics, fantastic gameplay, and a good story!

Full out battle on the vicious hordes of zombies, countries worldwide are taking actions to eliminate the infected who are threatening the world with their outbreak.

Play World War Z with its amazing online co-op feature where you and your friends will have to defend against the zombies as you make your path towards finishing many of the missions and episodes this game has to offer.

A classic first-person shooter game, one of the most famous zombie games. Play as one of the main characters in an action thriller game where you will have to fight your way through the many zombies and proceed on to the next area and learn more about the story of the game.

There are many weapons and zombies in L4D2, from the boomer that explodes when you shoot it to the crying witch that is hard and difficult to deal with to the tank that charges towards you. The difficulty of this game can increase based on your preferences, and if you wish not to play alone, pick up some friends and play in a co-op zombie slaughter!

Survival horror with a first-person perspective, Contagion is a very realistic zombie game that takes a different approach than the other games.

It has challenging gameplay and excellent map design, but also a lot of jump scares and a terrifying atmosphere. Very recommend playing with friends as you can coordinate many ways to kill zombies together.

A single-player survival horror game, Into the haze, takes place at the beginning of an apology where you find yourself waking up at the rooftop of a very high building.

The city has been covered with gas, and it seems that an order has been made to annihilate everyone for the sake of containing the virus causing the apocalypse. Play and look for weapons, food, and other resources to help you survive.

While Rust doesn’t contain zombies or walkers, it is still one of the best survival PVP games out there. From a developmental that started years and frequently updated games, RUST is highly recommended for survival lovers. You will have to gather resources, build bases, acquire blueprints and fight other players.

Join teams and start raids; look out on the sky for many drops that contain guns and rifles. Alongside the fantastic quality and textures, RUST is a very addicting game that you will find yourself playing for many hours.

Set in a post-apocalyptic world in 2027, an infection has caused an outbreak that almost exterminated humankind. Those who died came back from the dead and caused even more threats to the remaining survivors.

Customize your character, raise a true friend, build a safe base, and shelter yourself from the danger outside as you learn about the crafting system, farming, and other exciting features.