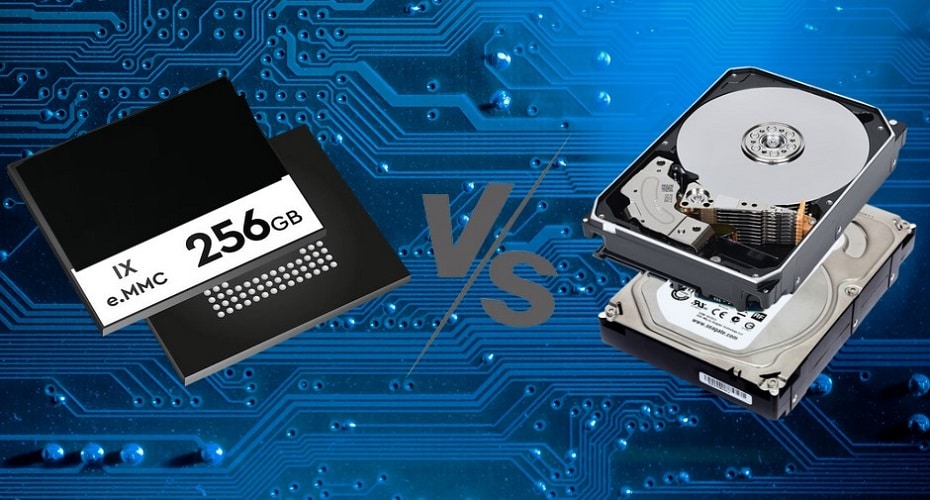 We already compared eMMC and SSD drives, both of which use NAND flash memory for data storage. Here, we’ll compare HDD and eMMC drives to help you make an informed judgement about the two storage media.

Embedded MultiMediaCard (eMMC) is a type of flash memory commonly used in portable electronics like smartphones, digital cameras, some PCs, and tablets.

Note that most current PCs and tablets use eMMCs and SDDs as internal drives instead of HDDs because of the durability, reliability, and super-fast data transmission speeds associated with the former 2 drives. 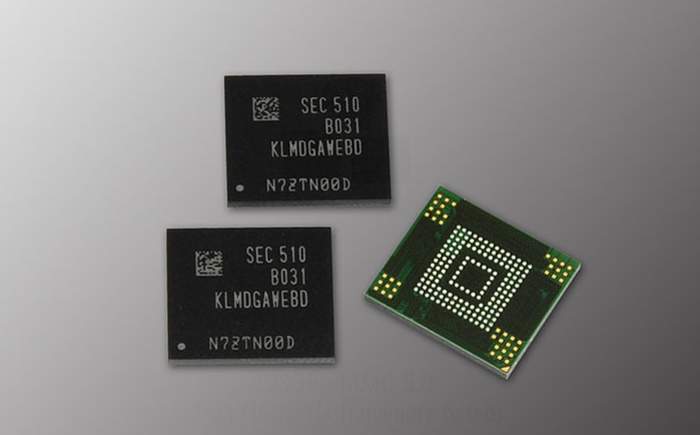 An Embedded MultiMediaCard (eMMC) refers to a flash memory-based storage device that is often found in smartphones, cameras, budget laptops, tablets, and other portable consumer electronics. Unlike HDDs that are susceptible to damage and potential data loss due to mechanical shocks, eMMCs are less prone to damage and data loss following mechanical shocks, thanks to their integrated circuitry.

By design, eMMCs incorporate the use of flash memory and a flash memory controller located on a single silicon die that’s then embedded onto the motherboard.

In terms of performance speeds, eMMC drives are much faster than HDDs but nowhere close to SSDs. Their capacity is in the range of between 32GB – 64GB and 128GB -256GB. It’s hard to come across eMMC devices with memory capacity in the latter range. 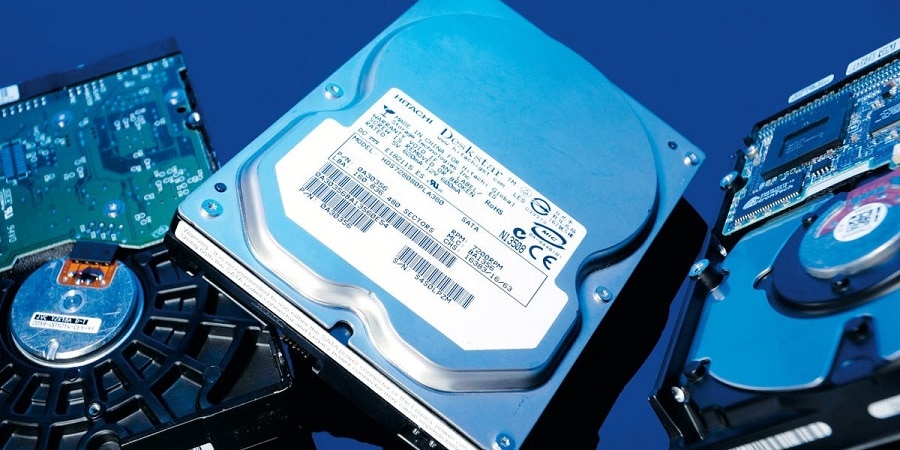 A hard disk drive (HDD) is a non-volatile digital data storage device that consists of spinning magnetic platters and reading heads. By modern computer system standards, HDDs are the slowest types of data storage drives. For that reason, they’ve been overtaken by eMMCs and SSDs as preferred internal storage drives in PCs and notebooks.

These storage disks are commonly used on PC and notebooks. It’s worth mentioning that laptop hard drives are available in the 2.5-inch form factor and are attached to the motherboard via the SATA 3 interface.

Lastly, HDD drives are available in a range of capacities, the most common ones being 500GB, 1TB, and 2TB.

Embedded MultiMediaCards (eMMCs) have smaller capacities compared to HDDs. The common storage sizes are in the range of 32GB – 64GB, though a few notebooks and laptops may feature 128GB – 256GB eMMC drives. 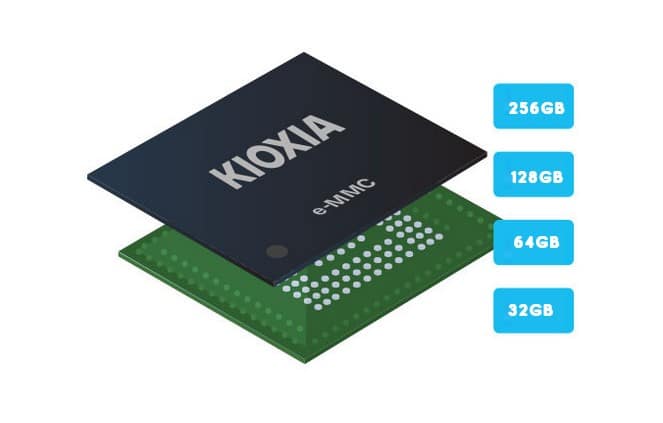 HDD drives have a much wider array of storage capacity options, including 320GB, 500GB, 1TB, and 2TB. Some desktop PC HDDs have a capacity of up to 6TB. 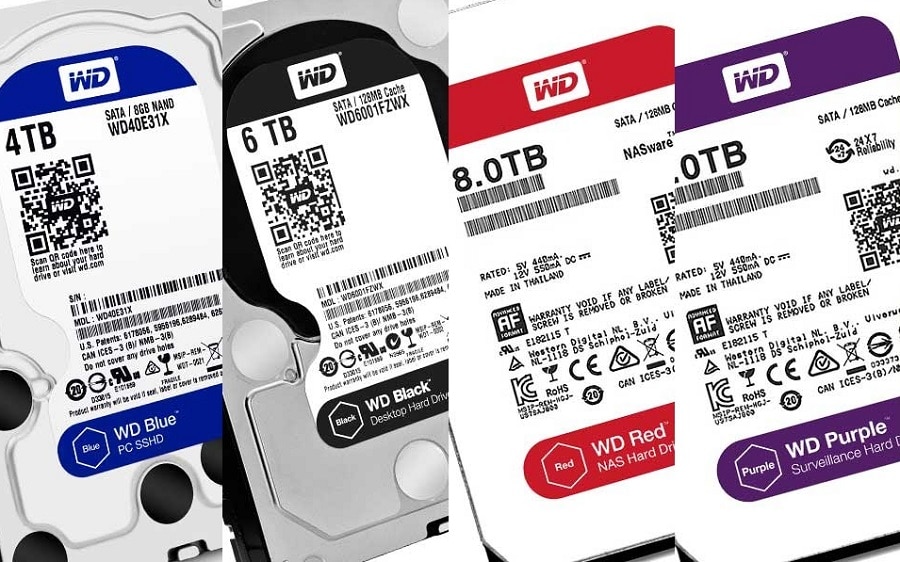 Choosing between eMMC and HDD on the basis of capacity ought to be informed by, among other factors, performance speed expectations, durability, and reliability. For instance, HDDs have a large storage capacity perfectly suited for PCs used for handling large data or gaming. On the other hand, tablets and PCs used for basic operations such as watching movies and surfing the web are better off with an eMMC drive.

Though HDDs have large storage capacities, they are not the fastest when it comes to data transmission speeds. Their performance is grossly impacted by the rotating magnetic platters. Besides, these drives have a fixed capacity upper limit beyond which no more data can be written on the disk. That limit is set somewhere in the range of 8TB – 10TB. 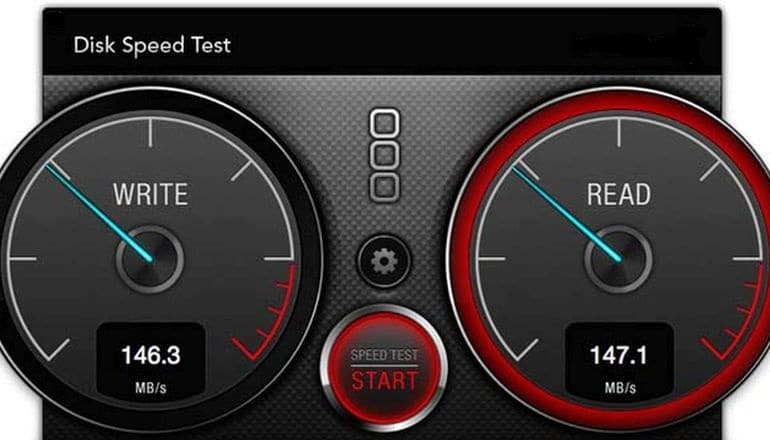 On average, most eMMCs with the latest v5.1A storage standard is capable of transfer speeds of up to 600 MB/s. The speeds vary proportionately with the version of the drive, i.e., the latest versions are faster than their earlier counterparts.

Check the table below for a detailed comparison of the transfer speeds by the version of eMMC.

Compared to eMMC drives, HDDs have much slower data transmission speeds. The overall performance of hard disk drives is affected by their mechanical components, especially the spinning platters and magnetic heads.  Also worth mentioning is that later versions of HDDs have much better speeds than earlier versions. 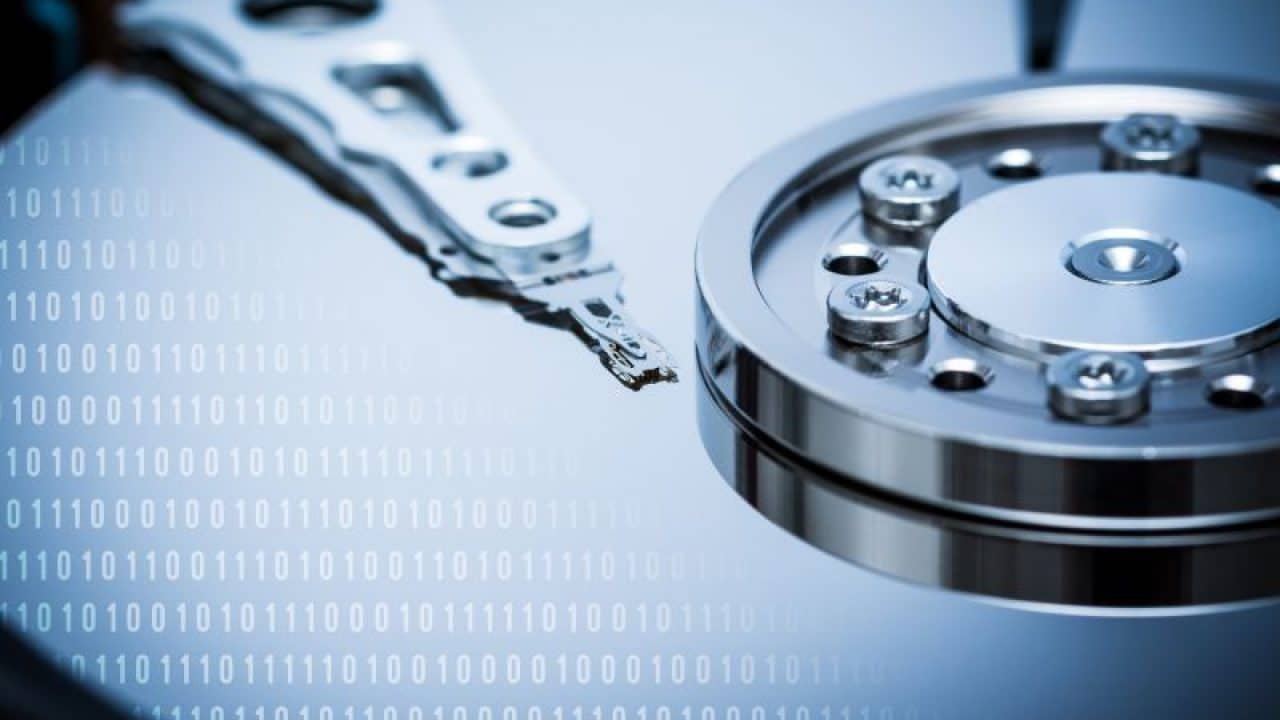 The table below provides a summary of the transfer speeds for 3 versions of HDDs. 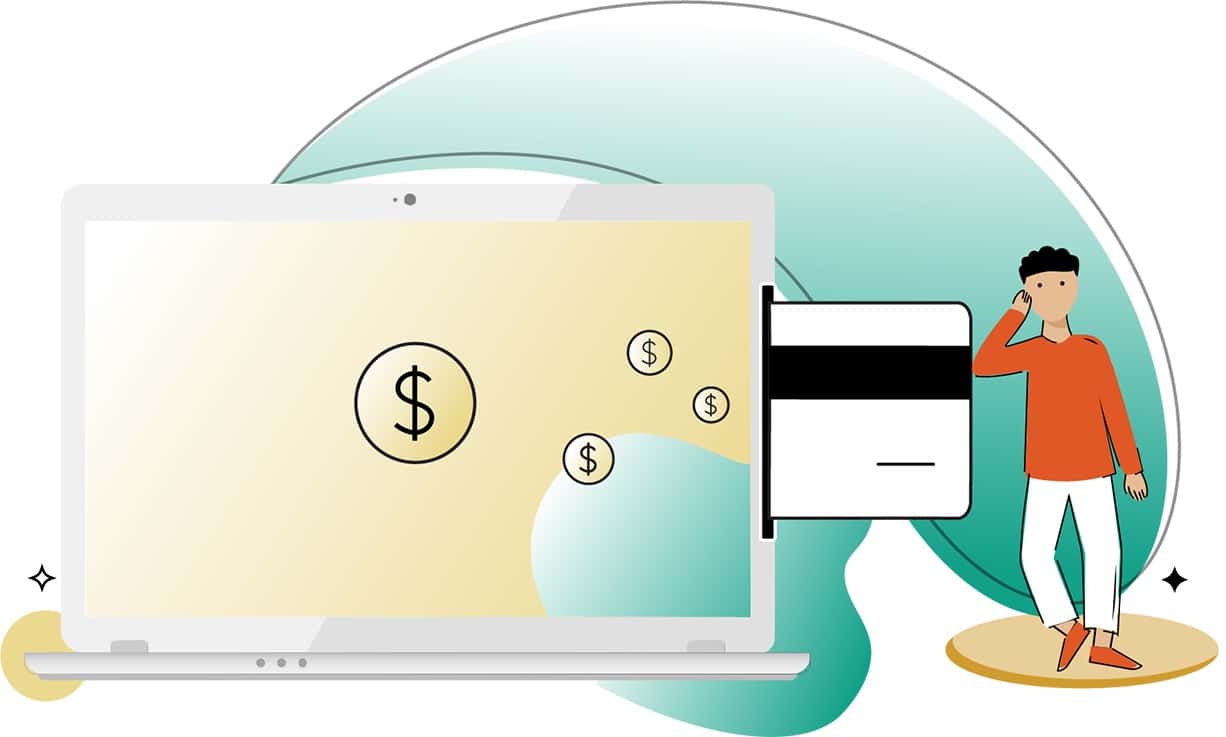 On the basis of dollars per gigabyte, the embedded MultiMediaCard (eMMC) drives are more expensive than HDDs. That difference in price is only expected, considering that eMMCs have better speeds than hard disk drives.

The price of eMMC or HDD drives is also affected by their versions. Later versions of either drive costs slightly more than earlier versions. With that being said, below is a summary table of price comparison by the version of eMMC and HDD drives.

Sometimes a laptop, tablet, or smartphone malfunctions beyond repair. The reason for the system failure could be software or hardware related. Be that as it may, it’s highly likely that the storage drives on such devices are still in good shape.

Now, devices using eMMCs, even though the drives normally have a long lifespan, are seldom reused on other devices. 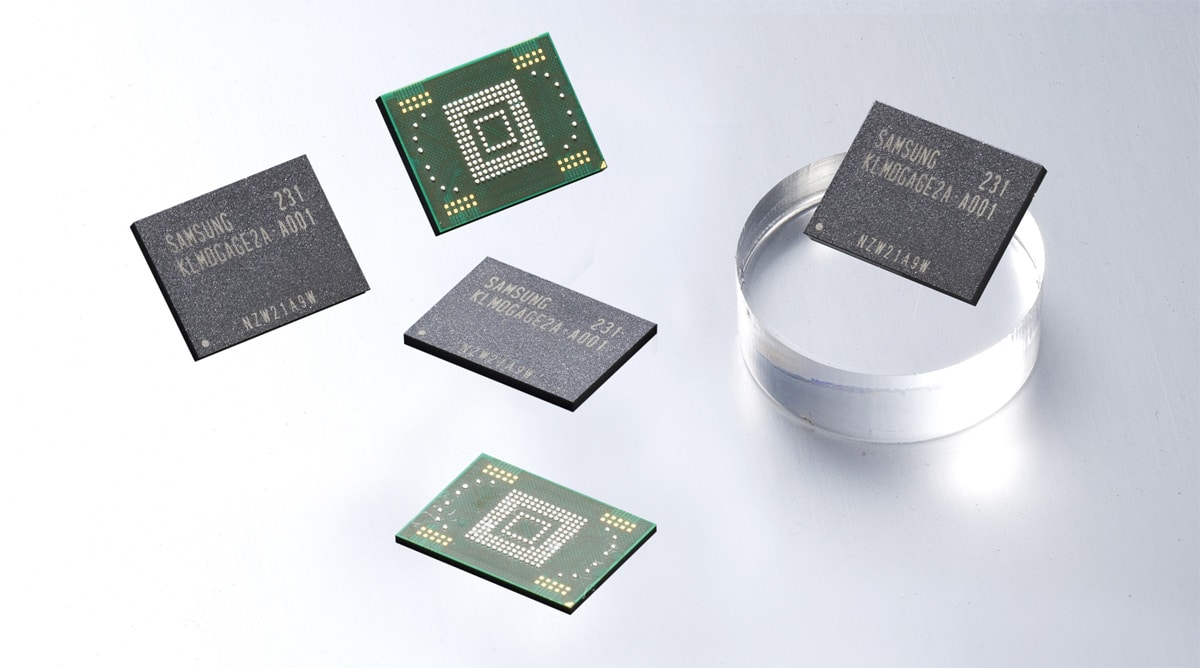 Not many people would consider replacing the eMMC drive on their budget laptop or tablet with a secondhand drive from another device. The reason for this is pretty obvious – most eMMC devices are very affordable. As such, one would rather order a new one than replace a drive.

HDD drives, on the contrary, are super recyclable. Whether you want to upgrade your notebook or laptop’s internal storage from HDD to SSD or simply want a larger capacity drive, the old HDD (or HDD from another PC for that matter) could very well be used as your external storage disk. 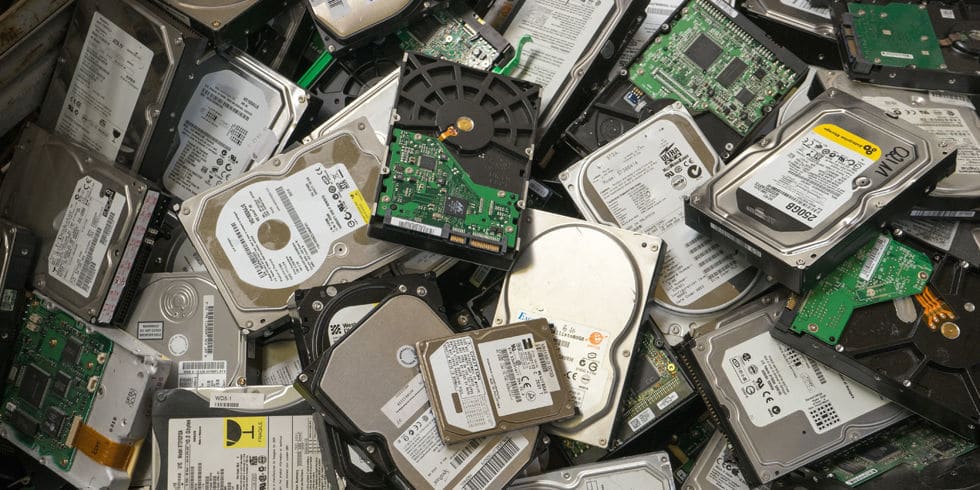 Compared to eMMCs, HDD drives are highly reusable because of their affordability, large storage capacities, and high compatibility between drives supporting the SATA interface. On top of that, hard disk drives are much easier to repair than eMMCs. 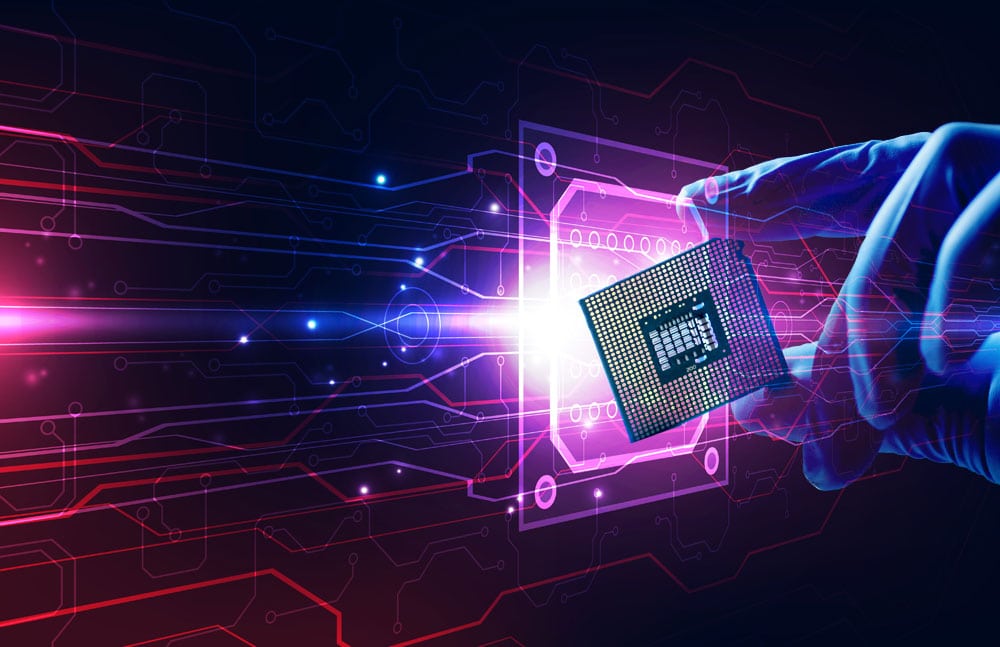 Lastly, eMMCs have a program erasure cycle (PE) of more than 1000. That accounts for a significantly high degeneration rate for the NAND flash memory cells whenever files are deleted from the drive, hence their short service life.

The service life of HDD drives is much longer i.e., averaging 10 years. The durability element of hard drives depends on a number of factors, including brand, capacity, and handling. For instance, Western Digital and Hitachi hard disk brands have a comparatively longer lifespan than the Seagate brand of hard drives. Also, large-capacity hard drives tend to have a shorter service life than their small-capacity counterparts. Mechanical impacts from accidental drops or knocks and electrical short-circuiting of hard drives also affect their lifespan.

Application of eMMC and HDD drives

Embedded MultiMediaCards (eMMCs) are often used in portable consumer electronics such as smartphones, digital cameras, as well as budget laptops and tablets. Recently, manufacturers have begun incorporating these drives in a number of smart home devices too.

Hard disk drives (HDDs) are commonly found in old models of PCs, notebooks, and tablets. Newer models of these devices mostly use SSDs or eMMC drives for internal storage. And that’s because of their fast speeds, reliability, and better performance compared to HDDs. Despite that, HDDs are still used as backup external storage drives.

Which One Should I Buy?

That will depend on your specific needs and budget. For instance, if you want a storage drive for a smartphone, camera, and PCs for basic home or office tasks, you may want to choose an eMMC.

Hard Disk Drives (HDDs), because of their slow speeds, are best used as external storage devices. If that’s something you were looking for, then go for it.

Tip! Universal Flash Storage (UFS) is a type of flash memory drives with much faster transfer speeds than eMMCs and is fast replacing embedded MultiMediaCards as the preferred storage disk in consumer electronics like mobile phones, tablets, cameras, and notebooks.

The average service life of an eMMC drive is 5 years. The lifespan is dependent on capacity, version, and usability.

2. Can you replace eMMC memory?

That’s possible but not very commonplace considering that most eMMC drives are very affordable.

The answer is both Yes and No. Yes, if you are considering capacity or you are looking for an external storage drive. No, in the sense that eMMCs have faster data transmission speeds than HDDs hence deliver much faster loading time, not to mention quick execution of program commands.