Is 200 Mbps Fast Enough for Gaming and Streaming? 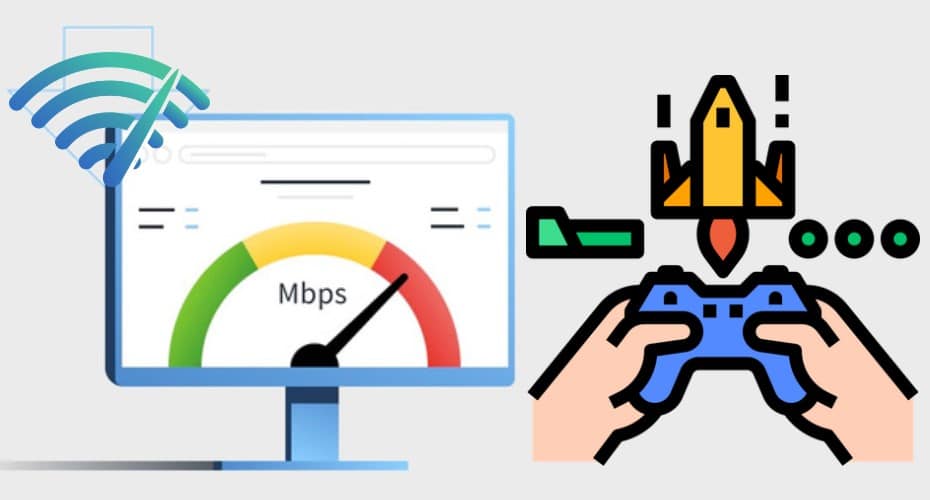 How much bandwidth are you allocated by your local internet service provider? Is 200 Mbps good for gaming, or you’ll have to put up with frequent buffers and stalls? Let’s find out…

When it comes to online gaming, connection speed and network stability are everything. Buffering and frequent stalling are the last things you want to deal with. In the same breadth, is 200Mbps good for gaming? In a nutshell, that’s what this post is about. We’ll try and elaborate on the dynamics of internet network connectivity as far as streaming videos and gaming goes. Among other details, we’ll find out the suitability of this much broadband- 200Mbps, for stable gaming. With that being said, let’s get started.

Mbps refers to a standard unit of measuring internet bandwidth which is the download rate of your internet connectivity. High Mbps translates to a faster internet download speed for files. The converse is also true. Mbps stands for megabits per second, also known as a million bits per second. Recall that 1Mbps = 128 kbps, and the network download and upload speeds for the connected devices correlate to a certain degree.

Another important element of network connectivity that’s key in gaming is latency, also called ping rate. What that means is the length of time it takes for the server to process a request. If your ping rate is low, you’ll experience extended lag time. Meaning, you’ll have a hard time competing against players with higher ping time. Lag time is what, in other sectors of the web, is called buffering.

The Impact of Mbps on the Game 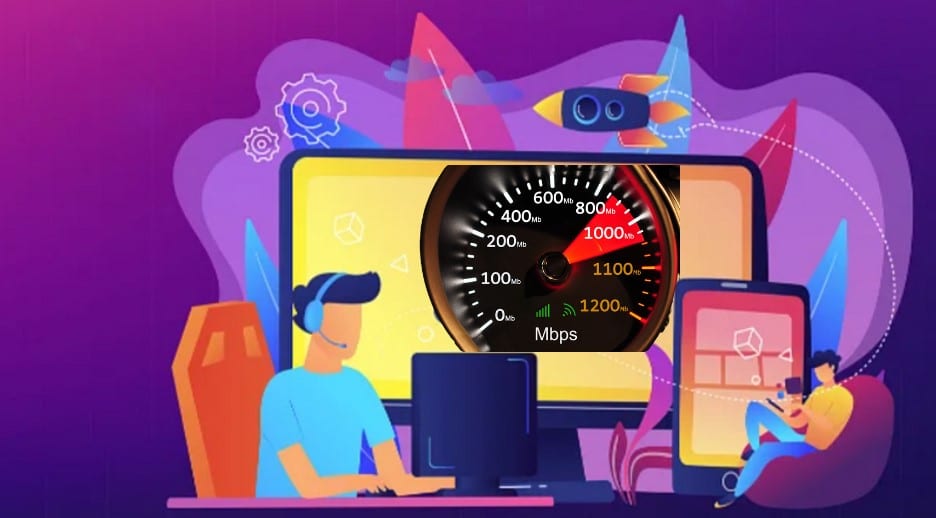 When it comes to gaming, two elements of the network come into the picture. These are the frame rate (FPS) and the Ping time or latency.

The FPS refers to the number of frames per second, and it is a major determinant of how smooth a game runs on your PC or on the phone. The frame rate of a computer is mainly determined by its hardware specs. Gaming computers with high frame rates (between 60 FPS and 120 FPS) have a much smoother on-screen motion rendering when compared to their low frame rate counterparts (30 FPS or lower).

In gaming, latency, also called ping time, is the time interval it takes for the system or gaming server to process a request, such as moving a joystick or pressing a button. The lower the ping rate (in the range of 15 – 20 milliseconds), the better the gaming experience.

In theory, a 200Mbps network speed is not too low for pings. However, in the event of network fluctuations, for instance, when more people are connected, like is the case for an average family, the ping rate can rise remarkably, thereby causing serious lags in the game. Both FPS and latency affect file upload and download speeds.

Most online games require a download speed of 3 Mbps, at the least, for a single player on a network. For competitive gameplay, you’ll be better served with bandwidths in the range of 20-30Mbps. That applies to competitive gaming in networks shared by family and maybe other users. If these stats are anything to go by, 200Mbps is more than sufficient for gaming, especially if there are very few users tapping on the same network.

Some online games, such as League of Legends, are known to generate very little traffic in the range of 40-60MBs per round. That’s true on dedicated networks or on networks shared with family or other users. Meaning, a 200Mbps bandwidth network with stable connectivity is not only good but is more than necessary to run video games of such a caliber. On the other hand, web page-based games require a considerably larger number of maps to be loaded beforehand. As such, network speeds of up to 200Mbps may just be the minimum it takes to get them up and to run. 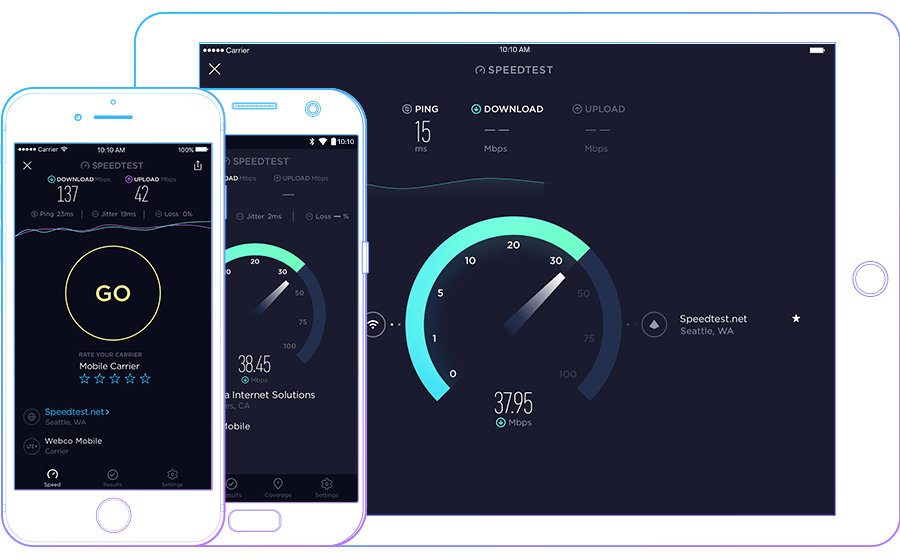 It is possible to check your internet speed in order to verify whether or not it matches what the internet provider is offering. The measure of internet speed and network stability can be done on this website: https://www.speedtest.net/. From the analysis, you’ll also be able to tell if your connection has the right speed for gaming.

The site also has native apps for most of the popular operating systems making it very easy to check your internet speed on whichever device you’re on. Some of the supported apps include Chrome, AppleTV, CLI, Android, iOS, Windows, and Mac.

What’s more, the platform provides you a detailed analysis of how your country’s internet speed ranks on the Speedtest Global Index. That way, you may know whether or not 200Mbps is good for gaming, considering your network speed as indicated on speedtest.net. This applies to both gamers and non-gamers.

How Do I Get Faster Internet Speed?

Slow internet speed is a product of many factors that all contribute to data packet loss resulting in high latency. Having checked and confirmed your internet speeds via the above link or using a broadband internet checker, the next thing that comes to mind is how to improve the connectivity speeds, especially if you’re experiencing frequent lags while gaming. Here are some options to consider if you want to give your internet speed a performance boost.

i. Switch from Mbps Wi-Fi to Ethernet Connectivity 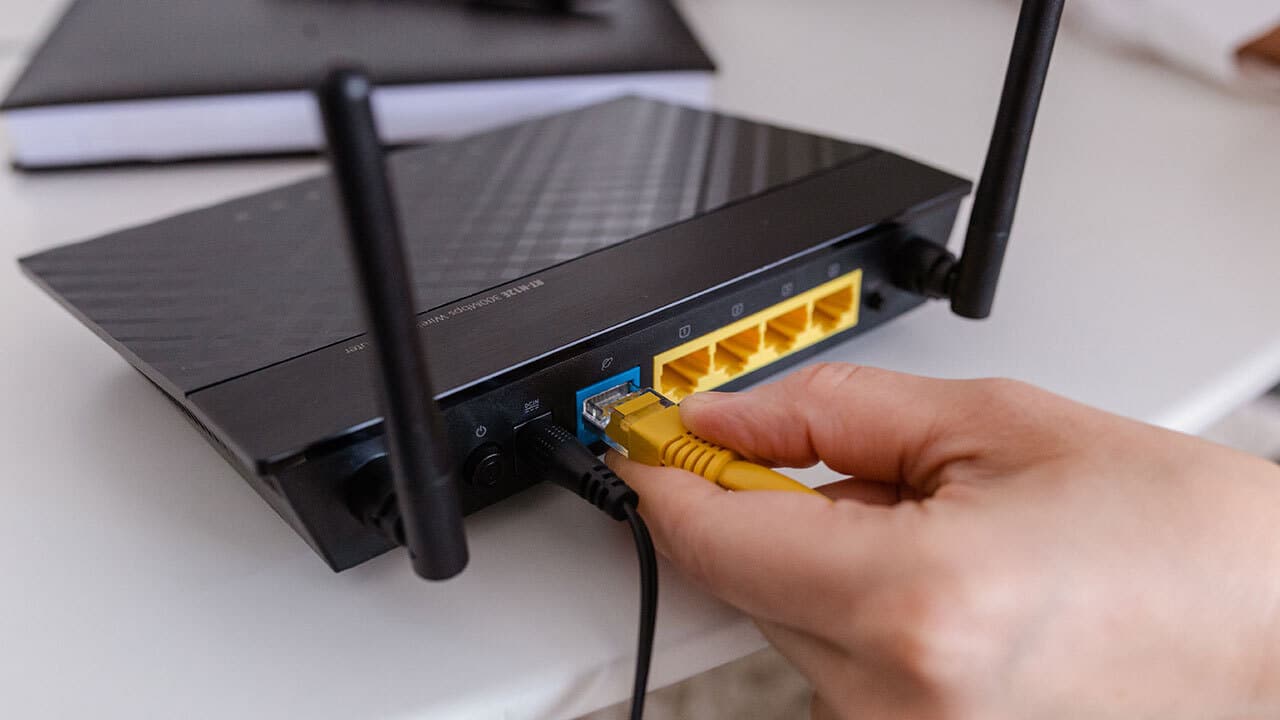 If you’re engaged in multiplayer gaming on your laptop via an Mbps Wi-Fi network, consider using an Ethernet cable instead. That way, your connectivity speed is going to increase significantly.

The thing is, Ethernet cable, unlike Wi-Fi, ensures that data packet transmission is delivered straight to your gaming PC by evading connectivity barriers such as walls and other physical obstacles.

By switching from Wi-Fi signal to Ethernet, you’re also technically disconnecting any other smart devices that may have been plugged onto the network so as to avoid any connection issues. What’s more, Ethernet connectivity also reduces download times remarkably.

ii. Switch to a Faster Router 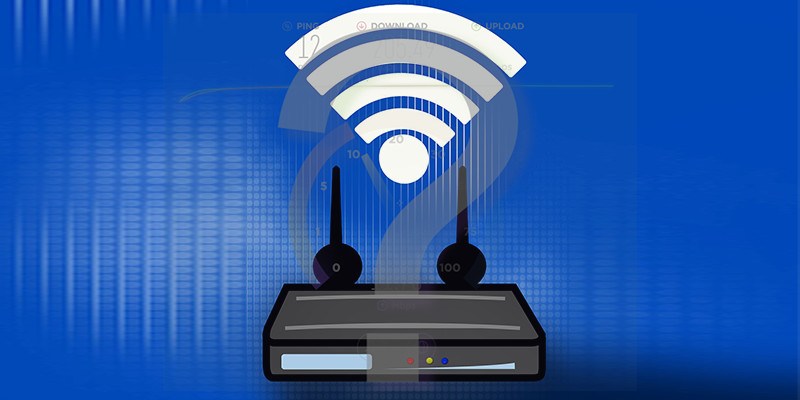 As technology changes, you should strive to keep up with the trends. The truth is if your network has been upgraded but your gaming router or modem is centuries old, then it’s likely that it won’t be able to handle fast data transfer speeds, often associated with a super-fast gaming experience.

Simply put, network speeds of 200Mbps range theoretically require a gigabit router. So, if you’re experiencing lags and slower speeds while gaming, the culprit is likely that century-old router or modem affixed on your wall. Consider replacing it with a faster, more modern type in order to see a significant boost in the gaming network speeds.

It will also improve the quality of your video calls. Carriers such as Verizon have awesome packages that can be used alongside your router to deliver the best connection speeds for gaming. The Verizon Fios is one good example. Your service provider will be able to advise on routers. 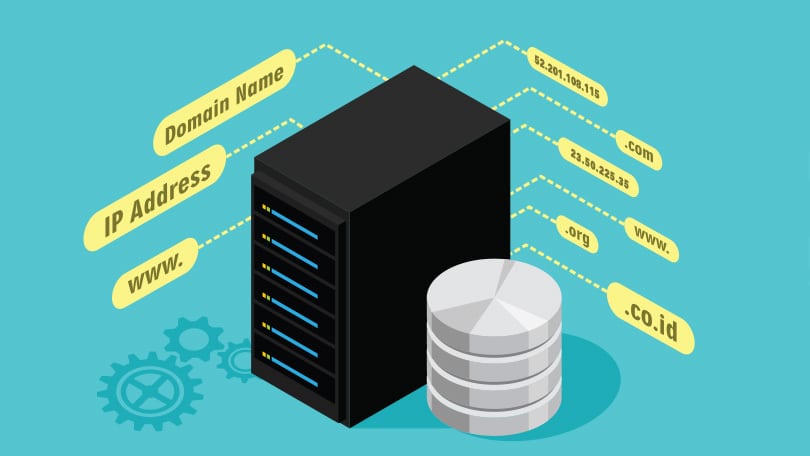 A common cause of connection lags and slow speeds is when the gaming server is in a far-off region from where you are at. That implies that your requests travel further to and from the server. If that’s the case then, a quick fix would be to modify the PC’s DNS settings to match the gaming server location. This has been found to boost the network speed significantly by reducing the ping rate, also called latency. Further, reduced connection latency and increased network speeds are also ideal for high-definition video streaming.

A game accelerator works by connecting you to a gaming server nearest to you. In doing so, it not only bypasses blocked and jammed networks but also ensures the connectivity is fast enough for a stable gaming experience. Essentially, game accelerators stabilize the ping rate, thus also stabilizing the network connectivity in turn. 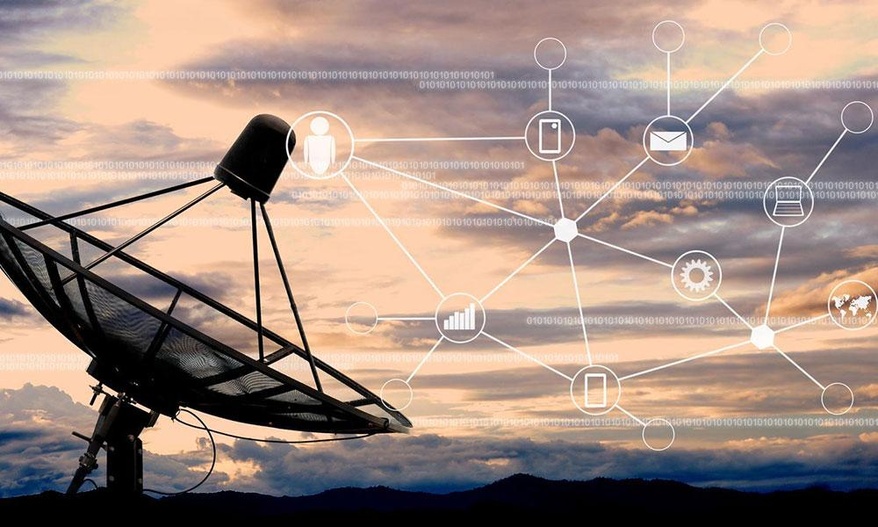 Another way to get faster internet speed for gaming is to look to space; satellite internet. To get that, you’ve got to liaise with satellite internet providers within your locality. Because of its reliability, more and more internet users are looking to the clouds for high-speed connectivity. Moreover, satellite internet utilization also supports different genres of games. Meaning, you can enjoy playing just about any video game without worrying about network fluctuations.

Fiber optic internet is known for its blazing-fast connectivity, perfect for gaming. Irrespective of how far you’re from the game server, fiber connection delivers unmatched surfing speeds for the best gaming experience. It is particularly best for multiplayer games and HD video streaming. The fiber optic internet providers have different internet packages, internet plans, and internet deals for every budget. Be sure to choose what suits you best. 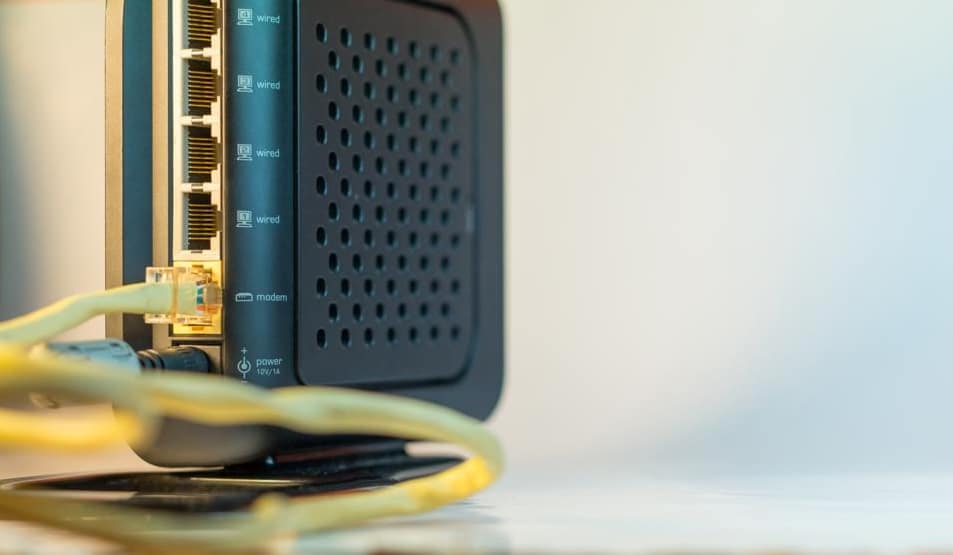 Cable modems are single user-targeted. Because such internet data devices can be plugged in and used only on one gaming PC unless it’s plugged into a router or it’s Wi-Fi enabled, your connection stability and speed should be significantly higher. That notwithstanding, you might want to verify the modem status information in order to be sure that the device is compatible with the high-speed connectivity spec required for video gaming.

Q. Does Online Gaming Use a Ton of Bandwidth?

Not really, online gaming uses very minimal data. The amount of bandwidth used is dependent on the type of game.

However, some of the digital game downloads are huge and may use a big percentage of your data. Different games vary in data usage.

Q. How much bandwidth is needed to play LOL?

League of Legends just needs around 55mbps. The internet speed is important as it determines LOL’s ping. Moreover, the bandwidth needed can range from 40mbps to even 70mbps.

Q. Is 200Mbps enough for streaming?

Yes, internet speeds of 100-200 Mbps are ideal for streaming and video chats. To stream HD content you need a minimum of 5-25mbps. However, to stream 4k content, play online games, and download large files you will need around 100mbs -200mbps.

Is 200Mbps good for gaming? Remember that was the question this post was all about. After all, is said and done, the bottom line is that 200Mbps is a top network speed that’s more than enough for a smooth gaming experience, especially when the latency is low, and there are not many devices connected to the network.